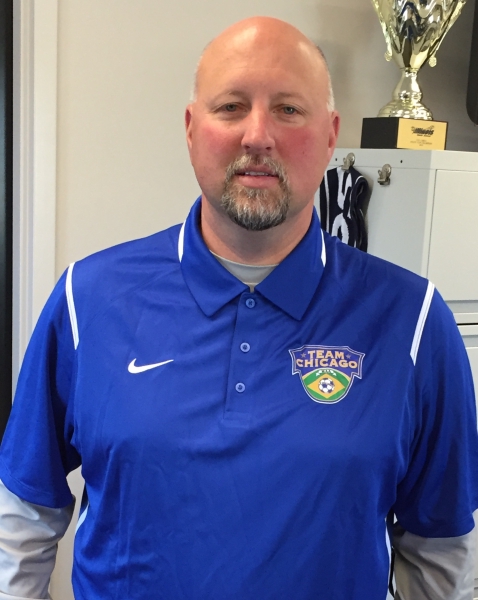 Team Chicago is pleased to welcome Steve Berry to our coaching staff for the 2016-2017 season. Steve brings a tremendous amount of experience, knowledge and education about the youth game, having served as a top-level coach for over 25 years.

Steve holds a United States Soccer Association A license and his hiring is another step in Team Chicago’s continued effort to provide our members with the best and most highly-educated coaches.

Steve is currently at P.E. teacher at Plainfield North H.S. and the boys varsity head coach.

Steve began his soccer playing career in Quincy, Illinois, where he was a two-time All-State selection, two-time All-Midwest selection and a honorable mention All-American.

After high school, Steve accepted a full-ride soccer scholarship at Division I, Quincy University. He played one year at Quincy before transferring to ISU where he finished his collegiate playing career,

After graduating with a degree in Athletic Training, Steve took a job with St. Ambrose University as Men’s Assistant Soccer Coach. While serving in this role for three years, Steve also worked for the Iowa State Soccer Association as a head coach and trainer in the Olympic Development Program. Also at St. Ambrose, Steve earned a second Bachelor degree in Education (with an emphasis in physical education and health education) and Psychology.

Steve next took a job as a Physical Education and Health instructor at Lincoln Community High School as well as head boys and girls soccer coach.

After serving in this role for four years, Steve took a job as Head Men’s and Women’s soccer coach at Illinois Wesleyan University, where he was named Conference Coach of the Year in his first year. While in this job, Steve started the CIS Soccer Club in Bloomington, Illinois where he then worked for six years as Director of Coaching and Player Development. During his tenure there, Steve won a IYSA state championship and finished as Region II runners-up.

Steve has been working camps for the past 25 years in different capacity.

Steve has his USSF ‘A’ Coaching License, his NSCAA ‘Advanced National’ Diploma and his Dutch (KNVB) ‘Youth’ Certificate.