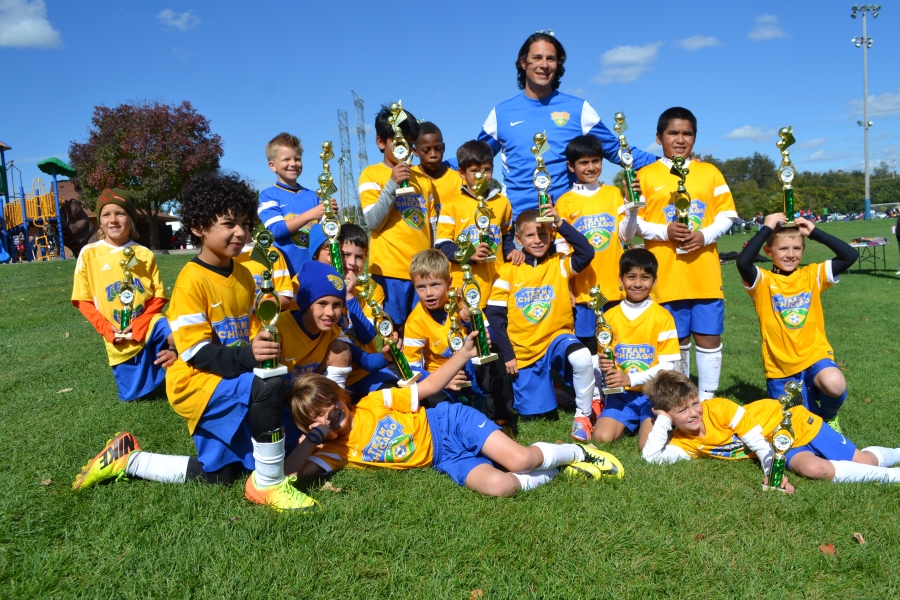 Over the weekend both U9 boys teams, Fluminense and Brasil Boys, took their talents to Glen Ellyn for the Lakers Fall Classic, and they left Team Chicago’s mark on another city.
Both teams had similar paths starting with Friday night lights games against Lyons Township teams. Fluminense had a rough start against LTSC Premier White but settled down to finish them off 5-3. Brasil Boys flew out of the gates beating LTSC Premier Black 5-2 with far less anxiety. Saturday morning was tough to get up for, but both teams skated through the snow and sleet well. Brasil Boys got a preview of their future final opponent against Elmhurt’s TESC Select. It was mostly one way traffic ending 1-7 with the lone goal coming late in the game. Flu’s winter game was against the home team Glen Ellyn Lakers Green. Unindicitive of the game’s balance of power, the final score was only 3-2, but it taught the boys soccer’s vital lesson of why to finish your early chances.
Saturday afternoon’s weather conditions made for mud bowl games, but both teams adapted like they were at home. The Brasil Boys filled their score sheet beating TESC Premier Green 6-2, and Fluminense kept things too close again with a final score of only 3-2 over Wheaton Wings Black. These results set up a unique spectacle for Sunday’s finals.
Fluminense and Brasil Boys had rematches against LTSC White and TESC Select respectively. Unfortunately they couldn’t cheer for each other, because they were playing at the same time. On the bright side, they were playing on adjacent fields. So, like another day at the office, the boys warmed up and displayed their skills together turning heads along the way. Fluminense solidified their Friday night result winning 6-1 in convincing fashion. Brasil Boys played an even first half giving up a late goal to go in to the break down 0-1, but, unfortunately, they ran out of steam and finished down 0-4.
Sunday’s sunny conclusion was a huge club success. Both teams solidified the clubs’ reputation for skill and team building culminated by simultaneous celebrating finalists shown best by their post game group picture. So as Team Chicago stamped their style on yet another Chicago suburb, we like to thank and congratulate all the boys and families that helped make this possible. Well done Team Chicago!