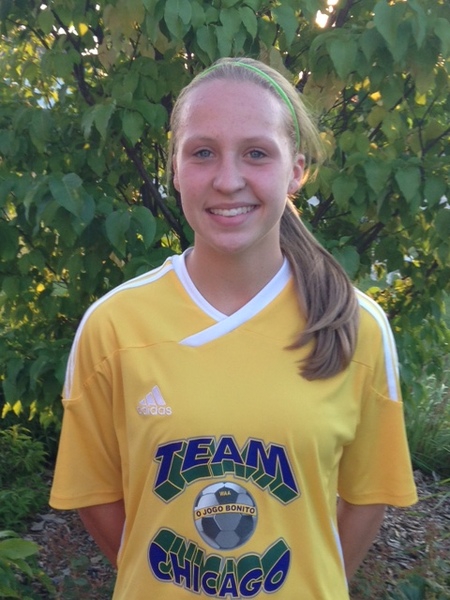 Bahia entered the game needing a win to secure MRL Premier Division status. Bahia dominated the first half and created several scoring chances, but were not able to finish any of them and went into halftime knotted up at 0-0.

The second half started the same way with Bahia searching for their first goal of the match. Bahia should have been up by 3 or 4 goals at the midway point of the second half, but the importance of the game seemed to affect the composure in front of goal. Everything changed after Sophia Majher collected a ball on top of the box, dribbled two girls and beat the keeper to go up 1-0. This great finish proved to be all that Bahia needed to qualify for the MRL Premier Division.

However, the flood gates opened and within five minutes of the first goal Paige Miller added two more with great individual runs with the ball before ending with nice finishes. Jennifer “Jeff” Pochyly set up Paige’s first goal with a nice ball served in from the right side while the second goal was unassisted. Molly Grant added the final goal to make it 4-0 on a ball played through from Jennifer “Jeff” Pochyly that she calmly placed past the keeper.

Congratulations to Bahia for finishing in the top four to position themselves for great competition in the Spring of 2014.

Team Chicago Academy-Santos then took on first-placed, and previously unbeaten, FC United in the second game of the double-header at Commissioners Park. Santos needed a win to gain the upper-hand in the MRL Premier Division title race to earn a spot at the USYSA Region II Championships in Dayton, OH next June.

The importance of the game was evident in the opening 30 minutes as it was a very cagey affair where neither team wanted to open up too much. However, Santos slowly started to build momentum and created a few quality chance. In the 41st minute right-back Talise Romain made a commando-raid to the end-line and served in a perfect driven cross, which Gianna Marconi connected with at the far post for the 1-0 lead. Unfortunately, FC United tied it up in the last play of the half, so the score was 1-1 going into the 2nd half.

Santos came out with great purpose in the 2nd half, and Alena Sidwell got what proved to be the game-winner a mere 40 seconds into the half. She picked up the ball just inside the FC United penalty box and toe-poked it into the far post side-netting.

Halfway through the half Alena Sidwell helped set up the all-important insurance goal when she played a perfectly weighted through-ball to Heather Handwork, who then delivered a driven cross for Sara Stevens to forcefully latch onto inside the 6-yard box. Gianna Marconi made it 4-1 with her 2nd goal of the game in the 75th minute on a header off Kristen Brots’ corner. Alena Sidwell then capped off the scoring off another perfect Heather Handwork cross for the final 5-1 score.

With the win, Santos is now in control of its own destiny with two games left. A win and a tie will be enough to secure the MRL Premier Division title and the berth into the USYSA Regional Championships. The first game will be played at 7pm tomorrow (Wednesday 12/13) at Commissioners Park against Academy SC, and the final game will be this Saturday (12/16) at 1pm against FCX in South Barrington.