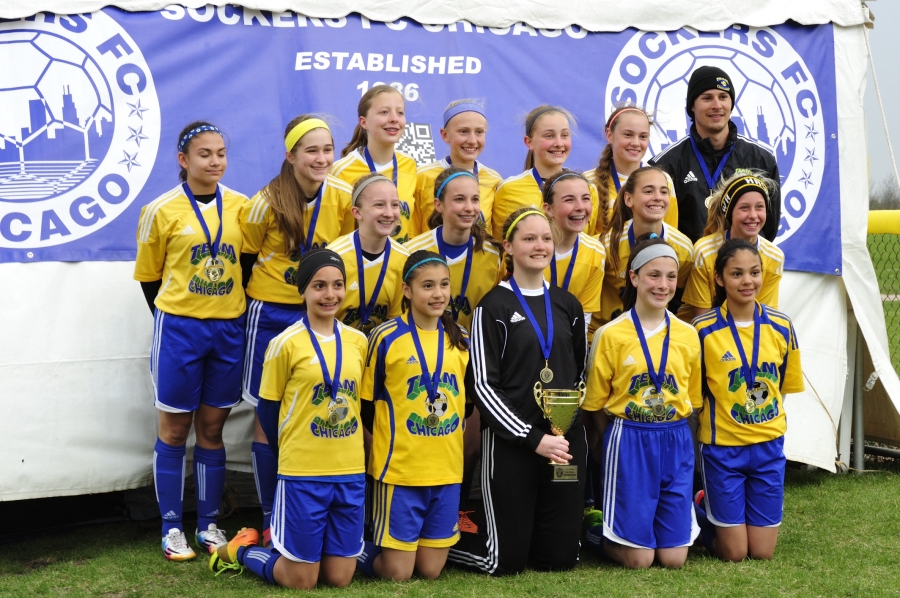 Team Chicago Academy-Ponte Preta showed off how much it has improved over the past 6 months this past weekend at a windy Olympic Park in Schaumburg. Back in October, Ponte Preta competed in the same tournament struggling to score any goals in three games. This past weekend, in more difficult conditions, Ponte Preta scored 7 goals while only giving up 3, and the girls displayed great team skill scoring every goal against the fierce wind.

On Saturday, the first game against Grand Rapids Crew Jrs was won 3-1 with goals from Emily Alt and Abby Kay (2). The second game was against Force FC, where the 3-0 scoreline did not accurately depict the sway of the game. Goals were scored by Sarah Phillips (2) and Delaney Putnam. The last group game on Sunday morning was great preparation for the final as the girls fell 1-2 to Sockers FC with the lone goal scored by Lexi Juarez.

The final, played against Ela Elite, with less than an hour of rest, was a tale of two halves dictated primarily by the wind. Both teams had the majority of their chances with the wind at their back, but the goalies prevailed leaving regulation with a 0-0 tie. Ultimately the title had to be decided by penalty kicks. With opening PKs missed by each team, Ponte Preta needed only one save from Reagan Sanders as they finished their remaining chances winning the shootout 4-2.

Congratulations, and good luck this weekend as the girls travel to Fort Wayne, IN for the Shoot for the Cure tournament!