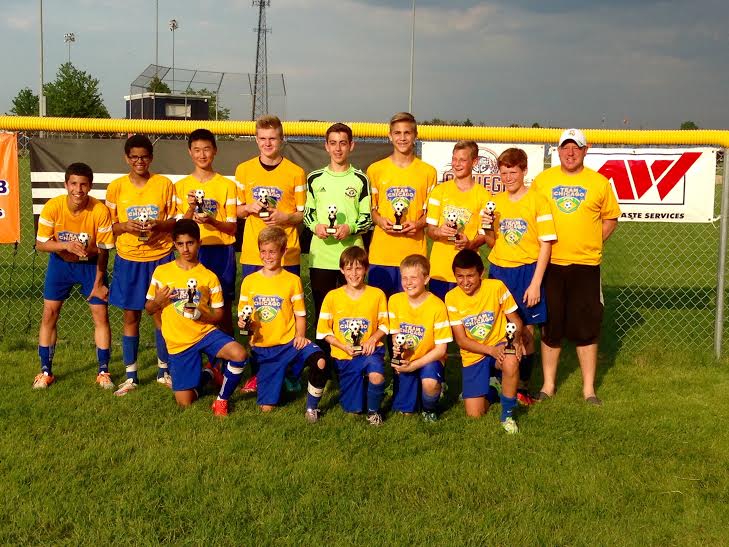 Over the Memorial Day weekend the Team Chicago Academy-Olimpico U14 boys put on an impressive show to win the championship of the Oswego Soccer Classic as they went without yielding a goal the entire tournament.

The first game of the weekend started off with a bang as the Olimpico boys won 7-0 vs. the Bolingbrook Raiders. Bryan Torres opened the scoring within the first two minutes as he slotted a ball past the goalie. Both Bryan and Nick McGrath would finish the game with two goals each and Jason Aranda finished with a hat-trick.

The next few games would prove to be more competitive. In the second game the Olimpico boys faced FC Scorpions and were able to escape with a 1-0 win. The lone goal came from Bryan Torres. The defense was anchored by Alex Bass and Abraham Antar with Nolan Laczynksi make some incredible saves in goal.

Sunday morning the Olimpico boys needed a win or tie to advance to the final game. They faced the Three Rivers SC in a defensive battle as the game ended in a 0-0 tie. Again, Nolan Laczynski was at the top of his game as he directed the defense and saved any shot that came his way.

After a bit of a rain delay, the Olimpico boys were set to face Mid State SC in the championship game. Bryan Torres started off the scoring mid-way into the first half as he slotted a ball past the keeper on an nice pass from Holden Beinhauer. The second half was a battle of possession as both teams were bringing maximum effort. With five minutes left Bryan scored again from outside the box putting the ball high into the right corner to cap off the scoring. Nolan held down the defense with another shutout.