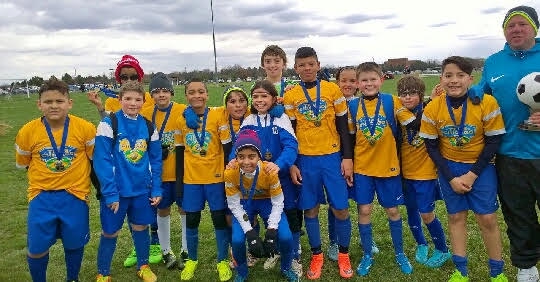 Roma won their first two games, which was enough to earn an automatic bid into Sunday’s final. The final would be against a very tough Croatian Eagles from Wisconsin.

In the first half Lucas Bass scored a goal to put Roma ahead 1-0. Not long after that the Eagles scored and the game went to half tied 1-1. The second half was an intense back and forth battle. With five minutes remaining Alexis Moreno chipped the Eagle goalkeeper to put Roma up for what they thought was the winning goal. Unfortunately, the Eagles literally scored in the last 10 seconds of the game to send it to overtime.

The overtime period did not last long. A few minutes in Kaiden Kranz dribbled into the attacking third and got the ball to Connor Hepburn who hit a challenging shot to the far post. The Eagle goalkeeper did not catch the ball clean and Lucas Bass poked the ball in for the winner.

Every Roma player made great contributions to bring the title home.