Internacional Finishes With a Perfect Record in MRL! 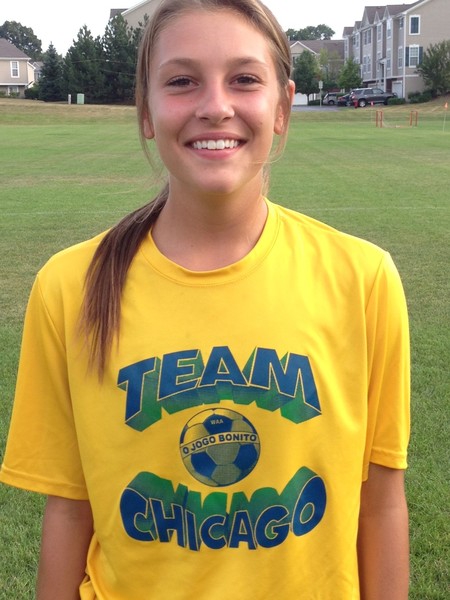 Team Chicago Academy-Internacional finished with a perfect 7-0-0 record in MRL after defeating Crystal Lake Force 2-0 on Tuesday night at PlayUSA. Internacional had already secured promotion to the U18 Premier Division next Fall prior to the game, and with this result they finished with an impressive 22 goals for and 4 goal against.

Mallory Mollenhauer got the eventual game-winner with 3 minutes left in the first half. Kiley Czerwinski attacked the end-line and drove in a perfect cross on top of the 6-yard box. Sam O’Brien made a strong dummy-run to the near post, and Mallory beat her defender to the ball at the back post.

35 seconds into the second half Kiley Czerwinski put the game out of reach when she latched onto a Sam O’Brien back-heel flick from a great Tori Christiansen overlap to the end-line and cross. Hannah Parrish and Shelby Stitz shared the shut-out in goal.

Next up for Internacional is the CASL Raleigh College Showcase November 6-8th.

Team Chicago Academy-Brasilia battled to a 1-1 draw against TNT Dynamite (MI) in its final match in the U15 MRL Premier Division I group this past weekend. Brasilia entered the game with a chance to finish second in the most competitive division of MRL if they could come away with a win.

Controlling possession for the first 20 minutes of the half led to Brasilia taking a 1-0 lead. Play started with Emerson Fuller playing a great ball out of the back to Abby Severson who found Rachel White in the box. Rachel put her touch in behind the defender and beat the keeper for the only goal of the match for Brasilia. Against the run of play TNT scored to tie up the match and although Brasilia created more opportunities they could not find the back of the net.

Congratulations to Brasilia on finishing tied for 4th in the 10-team Division with a record of 5-3-1 for the 2013 Fall MRL Premier Division I league. Great job girls!

Team Chicago Academy-Santos battled Academy SC at Commissioners Park last night needing at least a tie to maintain the upper-hand in the race for the U18 MRL Premier Division title and a berth into the USYSA Regional Championships next June.

Santos carried most of the play and had most of the chances in the first half, but was not able to convert on any of them. Instead Academy came out on fire at the beginning of the second half and scored two goals in the opening 10 minutes on great strikes from the distance. Santos tried to stage a come-back, but to no avail.