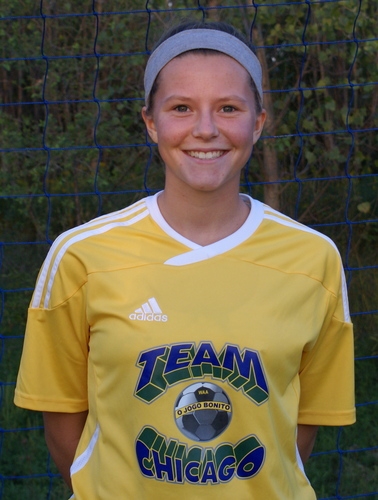 Team Chicago Academy-Santos beat FCX 4-1 in its final MRL Premier Division game. With the win Santos moved into first place with a 7-2-0 record and 21 points and 21 goals for and 10 against.

Santos is now faced with an agonizing wait on the result of the FC United-Academy SC game tomorrow night in Waukegan. An FC United win will see it leapfrog Santos and claim the title and the berth into the USYSA Regional Championships, but a tie or an Academy SC win will see Santos claim the MRL Premier Division title.

Santos got off to a great start against FCX on Saturday in very difficult windy and rainy conditions on a slick and fast turf field. Less than a minute into the game Talise Romain served a ball into the FCX penalty box, which Sara Stevens dummied into the path of Heather Handwork. Heather and an FCX defender combined to beat the on-rushing FCX keeper for the go-ahead goal.

Santos maintained an intense pressure on the FCX goal, and Hannah Rodgers hit the crossbar shortly after the goal. Several other good opportunities were squandered before Katie Ciesiulka got the game-winner after 20 minutes. She took a great pass from Hannah Rodgers in the midfield and drove towards the top of the 18 and hit a perfect, low shot to the foot of the far post. Santos continued to dominate and create chances, but instead FCX halved the Santos lead with 15 minutes left in the half on a quick counter-attack.

A 2-1 halftime lead for Santos was far from big enough based on the number of chances and dominance, so there was still work to be done in the second half. Santos quickly put the game out of reach, though, on two great individual efforts. Five minutes into the half center-back AJ Jakuszewski made a fantastic commando-raid up the right flank and drove a perfect low cross into the box for Heather Handwork to finish. And a few minutes later Hannah Rodgers received the ball from a Kelsey Pruett & Kristen Brots passing sequences and beat the FCX center-back on top of the 18 with two incredible moves before calmly slotting the ball past the keeper.

Santos had a number of big chances to extend the lead, but to no avail and the game ended 4-1. And so now Santos awaits its fate :-)