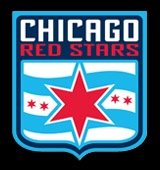 Make sure to check out Chicago’s professional women’s soccer team, the Redstars, who play their home games in nearby Lisle at Benedictine University. See attached file for schedule and ticket information.