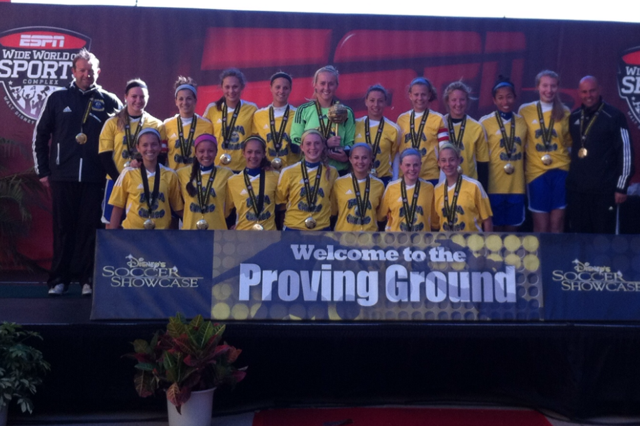 Team Chicago Academy-Santos won its U16 bracket at the prestigious Disney College Showcase with a 1-0 win in the final over Cincinnati Cup Crew. Capping an excellent week of games for the team, center-back AJ Jakuszewski got the game-winner halfway through the first half off Kristen Brots’ perfect corner-kick. Courtney Keefer in goal and the stellar back-line of Talise Romain, AJ Jakuszewski, Rachael Brots, and Kelsey Pruett combined to record the shutout – the 3rd shutout at the event.

Team Chicago Academy-Botafogo also advanced to the Disney Showcase Final but came up short in an extremely well-played final against Davis Legacy (CA) played under very, very difficult conditions with 38 degree weather and a strong wind. Botafogo dominated in both ball-possession and chances created, but unfortunately did not take its chances on the day. Although disappointed with the final result, the team still had a very successful showing in the top bracket of the event.