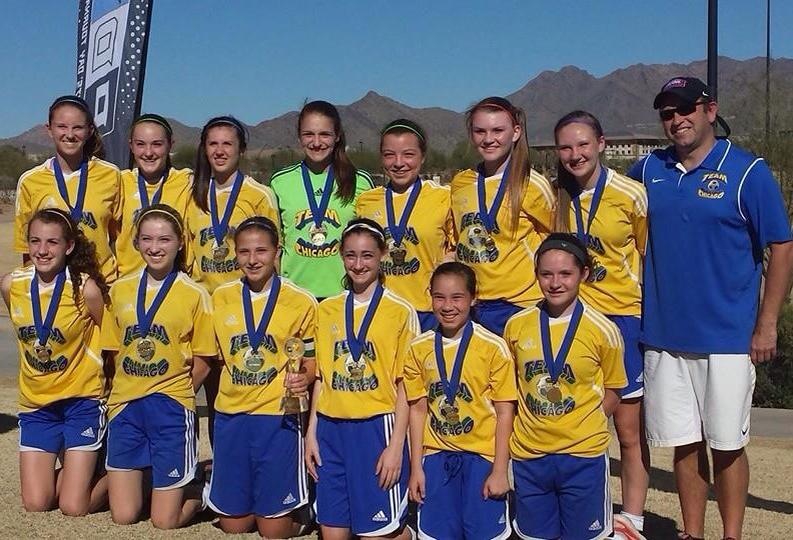 Team Chicago Academy-Cruzeiro won the U14 division after going 4-0-1 with 9 goals for and 2 against. The final against AZ Arsenal – the fifth game in 67 hours – was won on a Jordan King PK in the 61st minute after a foul committed against Alyssa Bombacino. GK Bailee Witt earned her 3rd shutout of the tournament anchoring a stingy defense where Emma Rydholm, Kenndy Metzger, Kaitlyn Mauder, Katie Wieland, Sarah Avery, and Sofia Papoutsis all played pivotal roles.

With the win Cruzeiro became the top-ranked U14 team in Illinois and 4th-ranked team in Region II.

Team Chicago Academy-Brasilia competed in the U15 division and finished in 4th place after finishing 2nd in its group. Brasilia tied Scottsdale Blackhawks 1-1 in the opener with Jasmine Ruiz netting the goal on a great free kick, beat New Mexico Rush 2-0 on goals by Jasmine Ruiz and Maddie Lambert assisted by MaKenna Schoolman and Safia Hannin, and tied Colorado Storm 2-2 on a brace by Jasmine Ruiz from Jade Eriksen-Russo and Lupe Anguiano. Brasilia lost the 3rd place game against AZ Arsenal after dominating most of the game.

The event was the last event prior to high school season for Brasilia. We wish all the girls the very best in the H.S. tryouts. For Cruzeiro and Bahia it served as a fantastic foundation to an exciting Spring season, which will include both MRL Premier Division play and the new IYSA State Cup round-robin format.