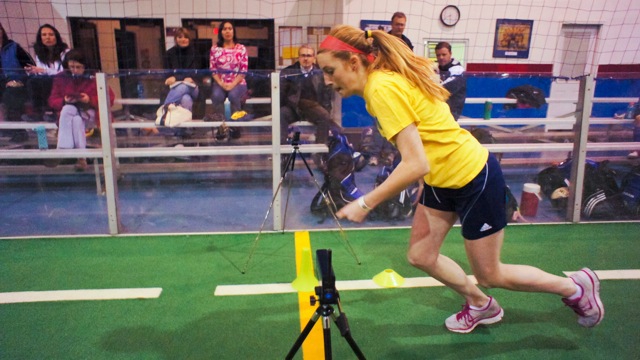 On Tuesday 1/24 the players from Team Chicago Academy-Santos and Botafogo were run through the NIKE SPARQ program at PlayUSA. The testing was done by the NIKE SPARQ national testing crew.

Each SPARQ Soccer Rating is derived from ranking, scoring, and adding the results of four field tests of athletic performance. Each test is ranked against a reference sample of hundreds of SPARQ Rated soccer players from around the world.

Scores on four tests compose the SPARQ Soccer Rating: 20-meter Sprint, Arrowhead Agility, Vertical Jump (for Peak Power), and Yo-Yo Intermittent Recovery Test. Each test reflects a different physical requirement of the sport, and together they provide a robust snapshot of a player’s athleticism. Linear speed, change-of-direction speed, lower-body explosive power, and endurance are key athletic attributes every soccer player needs. A player’s performance on the SPARQ reveals his/her strengths and weaknesses, allowing insight into what needs to be improved upon to become a better athlete.

Zoe Swift from Botafogo came away with the fastest times on both the 20-Meter Sprint and the Arrowhead Agility Test, while Jillian Van Kampen from Botafogo set the record for the Vertical Jump, and Zoey Goralski from Botafogo blew everyone out of the water on the Yo-Yo endurance test.

In the photo Santos player Maid Harris is getting ready for the 20-meter Sprint Test.