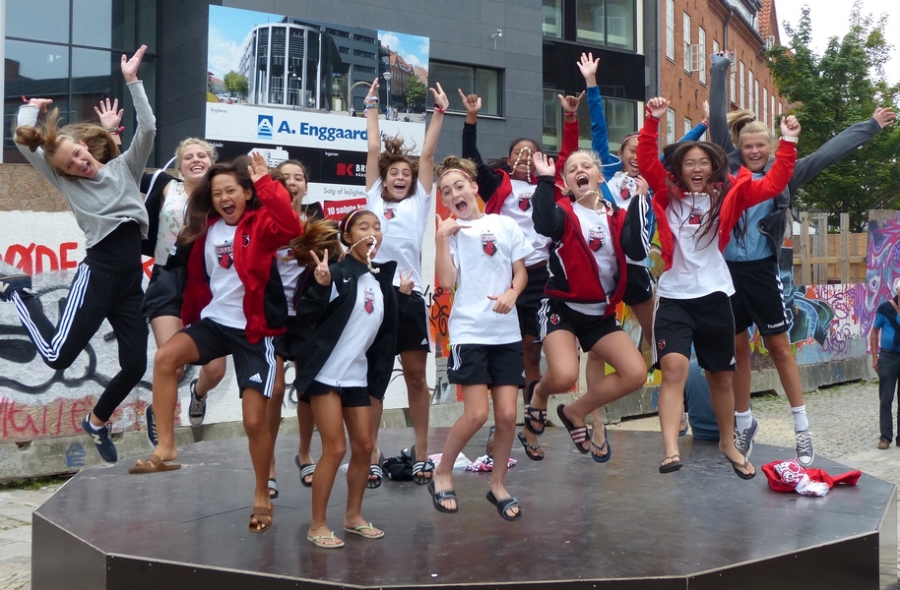 Claire Hensley – a midfielder on Team Chicago Academy-Cruzeiro – just came back from playing in the world’s biggest youth tournament Dana Cup in Denmark. Here is her account of the trip:

Last week I got back from the trip of a lifetime. I was able to play soccer in the Dana Cup in Denmark with a Hawaiian team that I guest played with on vacation last year.

Our first few days of the trip were spent in Germany, in a rural town about an hour outside of Hamburg, where the team practiced in preparation for the Cup. Exhibition games with German teams were arranged and we were able to get in extra practices. While in Germany I stayed with a German host family along with two of my teammates. Although the only food I had there was bread, butter, and salami, the experience was amazing.

Our last friendly in Germany was against SC Waren ’09 in their stadium, complete with walkouts and national anthems. They even bought a big Hawaiian state flag for our team. Afterward, we all gave them little gifts from Hawaii to show our appreciation. Following the match, our motor coach took us to tour Schwerin Castle, which was beautiful.

After our brief time in Germany, the team and I piled into the bus and headed off to Denmark. Dana Cup is held in a small town in the far Northwestern part of Denmark called Hjorring. It’s right on the North Sea, and a ferry ride away from Norway and Sweden – so we were really far north! We arrived at the school where we were staying and had a mini pizza party to get to know the three Danish guest players who were playing with us for the tournament. Our ‘home’ for the week was a classroom in a school with tables along the walls for our suitcases and 13 mattresses on the floor for the players and our chaperone.

Our second day in Denmark was great. The whole team walked into town where we rode a little train just for us up the cobblestone streets to the Mayor’s office. There, the team and I performed the Hula for him and two other teams who had traveled a great distance for the tournament; a boys team from Honduras and a girls team from Peru. The team from Honduras lit a large torch, kind of like they have at the Olympics, in the middle of the town with the Mayor, which was really cool. Afterward, we split up for lunch and some shopping before meeting back at our dorm for an afternoon practice.

That evening was the opening ceremony. When we arrived there, it was breathtaking to see all the different countries chanting and proudly raising their flags. We walked by country in a parade winding through the streets and then into Hjorring Stadium. There were 950 boys and girls teams in this tournament, so you can imagine the crowd. Walking into the stadium felt so surreal – we kind of felt like little super stars, with everyone taking pictures and waving. After the ceremony the team had a little more free time, and we went around taking pictures with teams from all over the world. We returned to the dorms happy and loud.

When we woke up the next morning we headed straight to breakfast. I was not looking forward to anymore bread and salami – thank goodness for Nutella. Following breakfast, we caught the bus to our first pool game. We played Baerum SK from Norway and won 4-0. We struck in the first minute of the game, and I had an assist. Right after the game, we had a quick snack of fruit and headed to our second match of the day versus Voss FBK. We won that match 5-0, again striking very quickly in the first half. I scored and had an assist in that game.

Following dinner at the dining hall and a good night’s rest we had our third and final pool play match the next day versus Kvinesdal IL, also from Norway. Our team came away with a 4-0 victory, earning us a bye for the first round of knock-out games in the “A” playoff bracket. In the round of 16, we played a very physical team from Hinna FB. We came away with a 2-1 victory, although we lost our center back in the last minutes of the game to a concussion. After the match, we took a picture with our opponent, as we had done after every match, and rode the bus home with a Saudi Arabian team who blasted music throughout the bus. Everyone started singing when “Treasure” by Bruno Mars came on.

Our Quarterfinal match was the next day, and our center back, Bri, was still out with the concussion, so we had no subs. We lost a hard fought game 0-1 on a deflection that caused an own goal. It was a tough loss to take. The team regrouped following the game and had a little free time. For me this meant “Yes! I can finally eat some Ben & Jerry’s ice cream!”. We enjoyed hanging out with our new friends back at the dorms, and the fireworks show that night before boarding the bus in the morning for Copenhagen.

After a 5 hour motor coach ride, we arrived in Copenhagen. Our hotel was right on Copenhagen Harbor, and after checking in, we all jumped right in. We had dinner at the mall next door, and a little more swimming before curfew. The next morning we took a canal cruise to take in the sights of Copenhagen. We also saw the changing of the guards at the palace, then off for lunch and more shopping. Our last day we spent hanging out together and more swimming in the harbor. I woke at 3:30AM to say goodbye to my teammates before their VERY long trip home to Honolulu.

My trip and playing opportunity in the Dana Cup was so rewarding. I’m thankful to the Honolulu Bulls for asking me to play, and of course to Phil for letting me go.