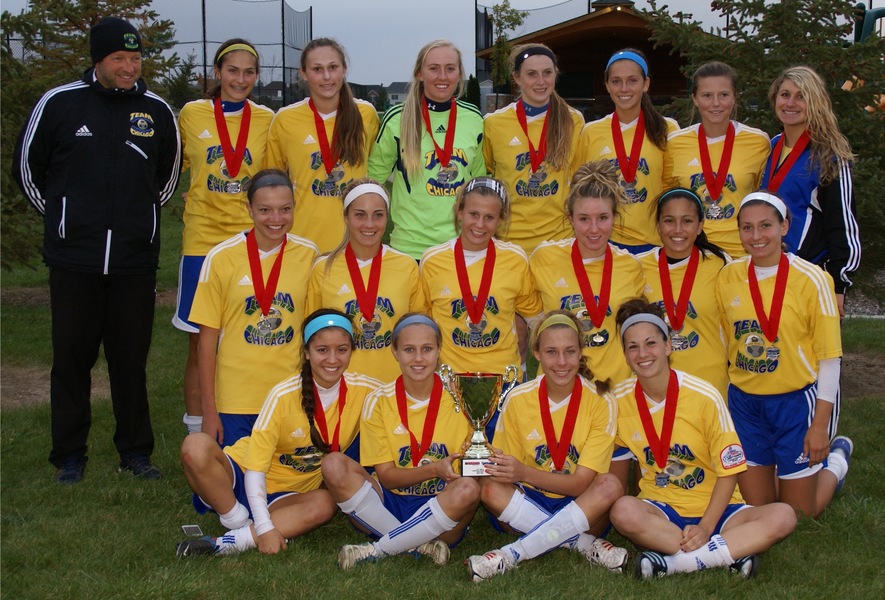 Team Chicago Academy-Santos finished as runners-up in the U18 IYSA State Cup this past weekend after a heart-breaking 3-2 double overtime loss to Windy City Pride in the final.

Santos qualified for the final with a 3-1 victory over Chicago-Inter Homer Glen on Saturday. Kristen Brots opened the scoring in the 2nd minute from a great Heather Handwork cross. Hannah Rodgers got the eventual game-winner with 12 minutes left in the first half when she ran onto Gianna Marconi’s perfect through-ball. Chicago-Inter halved the lead with 15 minutes left to play in the game, but Sara Stevens put the game out of reach in the 90th minute.

Santos dominated the first half of the final both in terms of possession and chances. Kristen Brots hit the post early on, and several other chances went begging in the first half, so both teams were scoreless at the interval.

The second half became a very physical affair as Windy City stepped up its intensity. Santos got on the board first though, as AJ Jakuszewski found Katie Ciesiulka who in turn found Heather Handwork on top of the penalty box. Heather beat two defenders and the on-rushing GK give Santos the 1-0 lead 15 minutes into the 2nd half.

10 minutes later Santos doubled its lead when Talise Romain served a great corner-kick into the box, and Heather Handwork headed it towards the goal and Sara Stevens headed it over the line. Up 2-0 with 20 minutes left in the game Santos looked like it had the game under control.

However, Windy City proved the old saying “2-0 is the most dangerous lead in soccer” true when they battled back to tied the game at 2-2 in the final 10 minutes of the half. First off a corner-kick and then with a shot from outside the box in the 88th minute.

The two 15-minute overtime periods were even more physical and intense. Windy City did everything within its power to stop the Santos forwards. And 7 minutes into the first overtime Windy City got what proved to be the game-winner.

The Santos players threw everything at the Windy City defense and GK in the remaining 23 minutes, but unfortunately the tying goal never came. The Windy City GK made a couple of spectacular saves, and the referee was kind not to judge a couple of the fouls by Windy City last defenders more harshly. And the in the end Windy City emerged victorious after an impressive battle.

Santos will have one more chance to qualify for the US Youth Soccer Region II Championships in Dayton, OH next June. 4 games remain in the MRL Premier Division I and 4 wins will earn Santos the MRL berth into Regionals. First up is a game against Academy SC on Wednesday, 10/30 at 6:30pm at the Commissioner’s Park turf field.