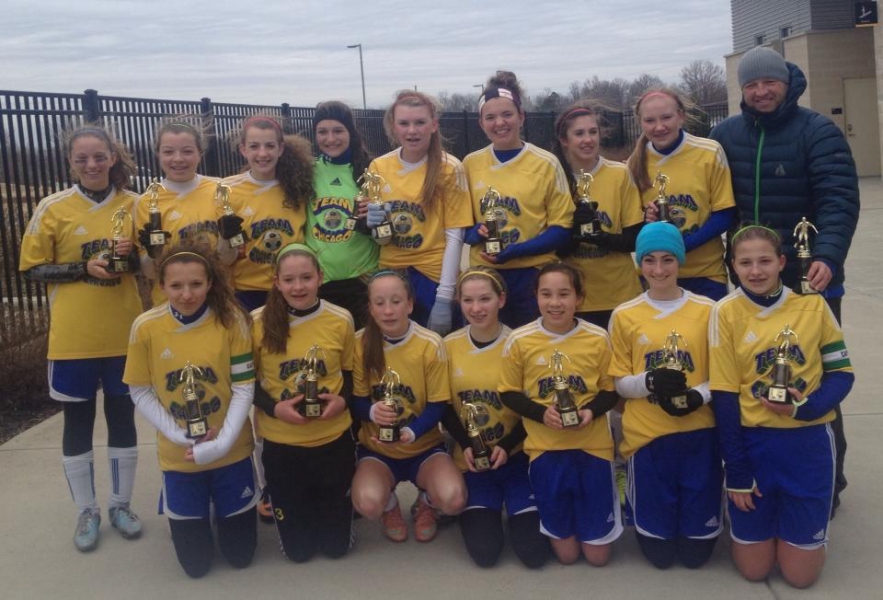 Team Chicago Academy-Cruzeiro emerged victorious from the U14 Division of the 2014 Cincinnati Elite Spring Thaw tournament this past weekend. With the win Cruzeiro moved up three spots to become the top-ranked team in Region II.

Cruzeiro opened with a 5-0 win over Blast F.C. from Ohio. This was followed by a 3-0 win over Zionsville from Indiana, and a 0-0 tie with Michigan Rush Northville to clinch the spot in the final.

The final was against FC 1974 Libertyville, and a rematch of an MRL game from last November which Cruzeiro won 4-0. Putting together the best overall attacking performance of the year Cruzeiro cruised to a 9-0 win. The opening goal was scored 8 seconds into the game after a 5-pass sequence directly off the kick-off, and the girls never looked back after this perfect start.

Team Chicago Academy-Bahia finished 1-2-0 in the U13 Division after losing two heart-breakers 1-0 to the hosts Kings Hammer S.C. and Rochester Lightning from Michigan, and beating Ohio Elite Pre-ECNL 1-0. Bahia played some great soccer, but unfortunately did not have the “bounce of the ball” in front of goal this weekend.

Team Chicago Academy-Brasil Girls also participated in the Cincinnati Elite Spring Thaw in the U12 Division. This was the first major event for the Brasil Girls, and the girls did really well for themselves in this environment.

They opened with a very tight 1-0 loss, after a game that was see-sawing until the last five minutes. The second game was a learning experience for the girls with a 5-0 loss to a very strong Michigan Jaguars team. However, the girls bounced back with a great performance in the last game on Sunday morning, and earned a well-deserved 1-0 win against the hosts Kings Hammer SC.