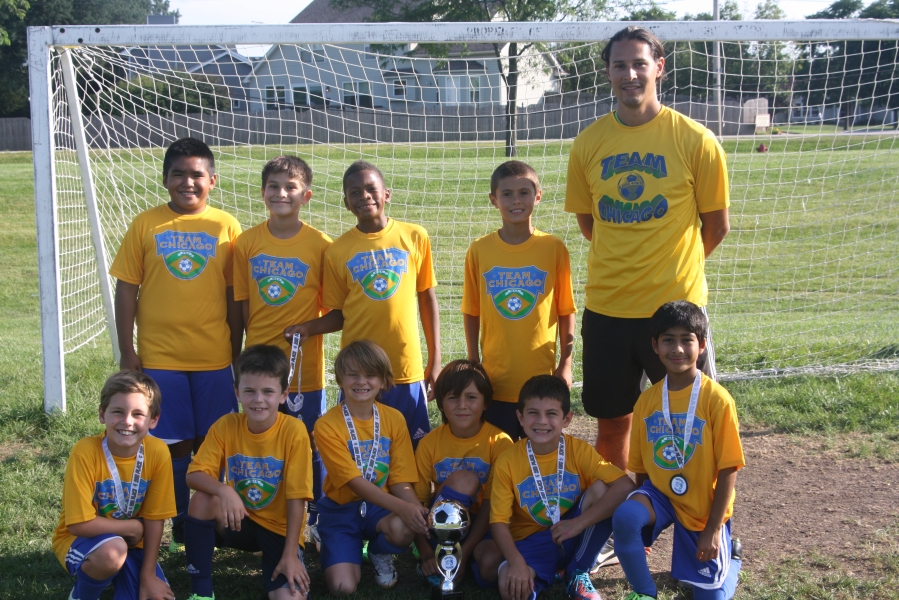 Three Team Chicago teams invaded Buffalo Grove during Labor Day weekend showing off an array of skills, abilities, and even a flare for celebrations as both age groups had a TC team in the championship game.
In the U9 boys division, Fluminense got Saturday off to a flying start beating Lindenhurst Academy 10-0 followed by a preview of the final against Lemont Raiders. In a very heated and emotional game, the boys came out on top 4-3 despite an advanced physical and tactical U8 Raiders team, putting them in the drivers seat to the final.
On the other side of the groups, with a very difficult draw, and despite the score, the TC Brasil Boys stuck to their guns dribbling and beating defenders using many of the moves Team Chicago is known for. Their highlight was pushing the U9 Lemont Raiders team to a tense 4-2 loss.
Fluminense’s last group and semifinal games were good tests of the boys’ versatility. Playing mostly out of position, the boys dispatched Schwaben Nationals and Hickory Hills Eagles 7-0 and 7-3 respectively. As a rematch, the final versus U8 Lemont Raiders was a testament to why the game is not played on paper.
Hoping for a cleaner game, Fluminense got anything but. They started off on the wrong foot going down 2-0 by halftime, one on a laser from well outside the box and the other on a dangerous low-driven cross from the end line which led to an own goal. The second half was dominated by the boys, but credit is owed to Lemont’s defense, specifically their goalie. They stifled Fluminense’s multi-versed attack, which even included a PK, long enough to get a decisive 3rd goal off a sloppy free kick to finish the game 3-0.
All 3 TC teams left their mark on the northwest suburbs through their skills, teamwork, and sportsmanship. Congratulations and thanks to all the players and their families who helped make this weekend’s fall kickoff possible.