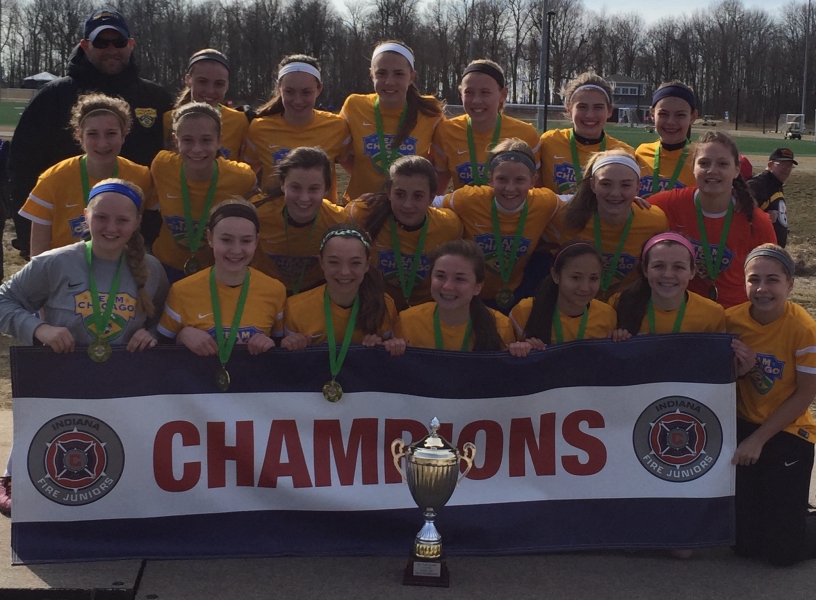 Team Chicago Academy-Bahia defeated Michigan Jaguars 4-3 on Sunday to claim a 3rd place finish in the U14G MRL Premier I Division with a 3-1-3 record.

Playing at Kalamazoo College, Bahia opened in style as Paige Miller beat two defenders to set-up Molly Grant for the 1-0 lead. And then Paige extended the lead when she ran onto Mia Marconi’s perfect through-ball and rounded the GK to finish in the empty net. Unfortunately, the Jaguars came back with two goals late in the first half.

Bahia went up 3-2 halfway through the second half when a Jaguars player was put under so much pressure from a Mia Marconi corner kick that she steered the ball into her own net. The Jaguars came back again to tie the score, but Bahia would not be denied. Natalie Massa drove into the Jaguars penalty box and was fouled setting up a PK for Sophia Majher to claim the game-winning goal with 8 minutes left. Sophia was cool as the other side of the pillow as she slotted home her PK.

With the 3rd place finish Bahia needed Omaha FC to win the Nebraska State Cup to qualify for Regionals. Unfortunately, Omaha FC lost 1-0, so Bahia will have to win its State Cup Final tonight to complete a great Spring campaign with a trip to Regionals.

The State Cup Final against Campton will be played at the Oak Brook Polo Fields at 6:30pm tonight.